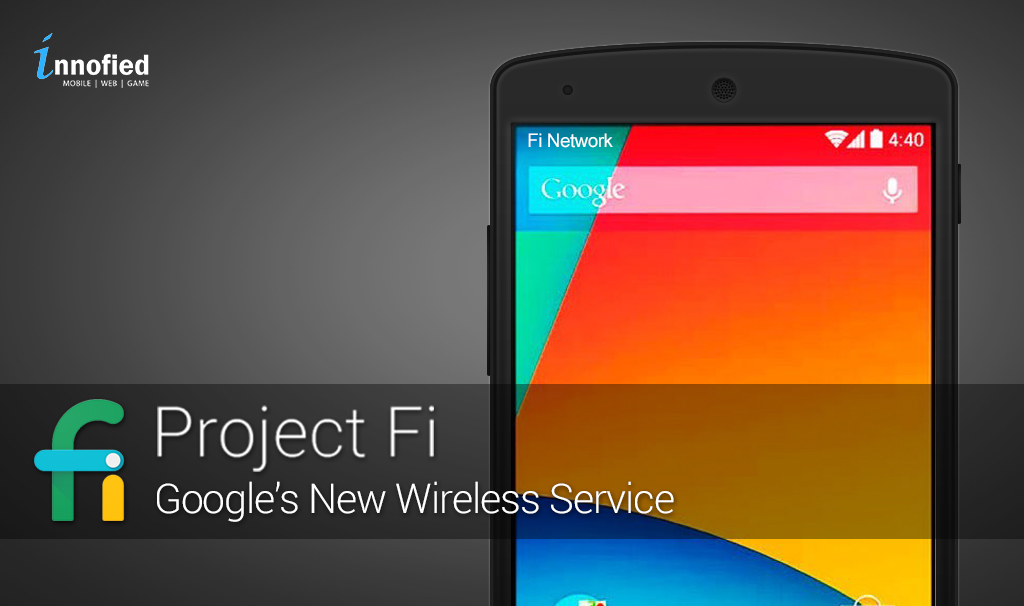 Google Fi – Will It Be the Future of Wireless Communication?

The wireless service from Google which is considerably cheaper compared to the major carrier cellular offerings. This major side gig has become the MVNO to some of the carriers.  Google’s long-rumored program to provide fast and easy cellular service directly to phones works by combining access to both T-Mobile and Sprint. Just with the use of an SIM card that can actively switch between the two without any user intervention.

Project Fi also prioritizes Wifi and lets you both call and text when connected to their Wifi network.  This is a special software on the phone  that automatically connects the phone to open Wifi networks to help limit your mobile data usage, and when it does so it also routes your traffic through a Google VPN for safety and connection stability.

The Search Giant, Google has stepped its foot into bringing a revolution in the field of mobile carrier service.Google’s Project Fi can be classified as an  MVNO (Mobile Virtual Network Operator). This simply means that it doesn’t operate on its own towers. The interesting part is that Google’s wireless services are special in multiple other ways.Google has enlisted the help of Sprint and T-Mobile’s cell towers to provide users the best of both (of those) worlds. The search company also offers a data-only plan for those not interested in making calls.

Project Fi piggybacks off both T-Mobile and Sprint networks. The device will simply choose whichever network connections is stronger and faster at the time and also offers an affordable price point. When connected to WiFi – calls, messages and data (of course) are routed through the internet, instead of using the network towers as it can cost Google some extra cash.

To further entice users to stick to WiFi networks, Google can determine which public WiFi hot spots are reliable and require no action to connect to them. Your device will do this automatically. But don’t freak out just yet – you can definitely turn off WiFi if you prefer.

Running this type of hybrid network is not an easy task, and Google needs full control over the devices that operate under this MVNO. So at present, they have chosen only one device to leverage the Fi facilities and it’s their very Nexus.

Why Google Thought to Explore This New Venture?

In today’s mobile world, fast and reliable connectivity is almost second nature. But even in places like the U.S., where mobile connections are nearly thoroughgoing, there are times when you turn to your phone for that split-second answer but lack fast speed. As mobile devices continually improve the ways you connect to people or gather information, so it’s important that wireless connectivity and communication keep pace and is fast everywhere, easy to use, and accessible to everyone.

That’s why Google introduced Project Fi, a program to explore to connect better by a fast and easy wireless experience.

How Does This Wireless Service Works?

Project Fi works with a special SIM card — and a little software on your phone — it can authenticate user on both T-Mobile and Sprint, and could switch between them on the fly based on a variety of factors. Because it can also use Wifi for calls and texts, one can keep using his/her phone in places where mobile data isn’t that great. Extra software called a “Wifi Assistant” will automatically connect user’s phone to open Wifi access points when they’re out of the house, reducing their data usage without any intervention on their part.

Project Fi is a hybrid service. So most calls are handled over Wi-Fi instead of a cellular network. There are plenty of Wi-Fi hotspots in the world, and chances are there to have one Wi-Fi at  your home and office. However, as common as Wi-Fi, it is not ubiquitous. If Project Fi was Wi-Fi-only, the service it wouldn’t have been  worth user’s time.

But there’s an interesting workaround. When Project Fi customers want to make or receive calls, the “Wi-Fi Assistant” feature finds the strongest available nearby networks and routes the calls to them. If Wi-Fi isn’t available, calls can be made using either the T-Mobile or Sprint networks; the two carriers are Google Project Fi partners.

Wi-Fi calling is fairly straightforward. Instead of calls going to cell towers and then to recipients’ phones over cellular networks, they are routed to the Internet via whatever Wi-Fi network users connect to, whether they’re home networks or public hotspots.

Networks change in quality as a user moves around. To help user gets the highest-quality connection at his/her location, Project Fi uses new technology to intelligently connect every user to the fastest network whether it’s Wi-Fi or one of Google’s partner LTE networks.When the Wi-Fi is strong, call quality is generally fine, though there are sometimes annoying delays. Such delays and the related interference get much worse if the signal is weak or if the Wi-Fi network gets overloaded with other traffic, which is more likely to happen on public or widely-used hotspots. But just like the past Google this time also has not compromised with the user’s privacy that’s why in Project-Fi Google secured user’s data through encryption when Google connects its user to open Wi-Fi hotspots. It’s like user’s data has a private tunnel to drive through.

The backup plan — routing calls to Sprint and T-Mobile — is a good one. However, these two carriers’ networks generally aren’t as strong or as reliable as Verizon and AT&T. T-Mobile’s network is weakest outside of cities and metro areas, which is also where one is the least likely to find Wi-Fi.

What’s the Difference In Other Carrier Service and Project Fi?

Well, this is really a personal question of whether you actually want to try Project Fi or not.

There are lots of cool features that make Project Fi a good choice, like the simplified billing, included international features and improved network coverage through the use of two carriers and Wifi networks.

Project Fi’s pricing isn’t dramatically lower than other carriers out there, and whether it makes a good choice financially for you depends on your data usage and which features you want. 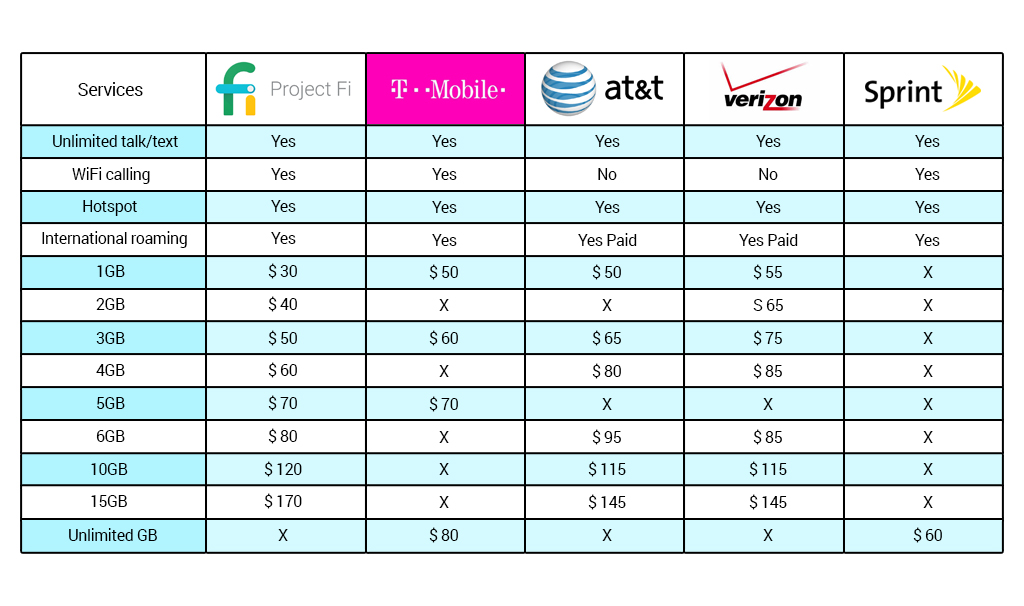 How it is assumed to be a big win?

You may be wondering whether Project Fi is suitable for business or not? While there are a lot of benefits which Project Fi allows looking after your mobility needs. The program is not exactly perfect from a business perspective, but everything has a good and bad face – let us start with the benefits in business.

1. Project Fi works in 120 countries. This is indeed great for consumers who love to travel and to business with employees located globally or who have to be on business trips frequently.

2. Pay for the data you require. Most people do not end up using every bit of data they purchase but have to pay for the data which they have not used. With Project Fi, users are credited for every MB of data that they do not use.

3. No annual contract. You do not need to pay for the service for the whole year if you do not want to continue with the Google Plan. There are no long term contracts which are a refreshing concept.

4. Google Fi is linked to Google Hangouts. Even if your phone dies, all other devices connected to your Google Hangouts, including tablets or laptops will ring or will pop-up notifications.

5. Affordable pricing plan. The 3GB data plan of Project Fi is available at $50, making it affordable compared to other major carriers. 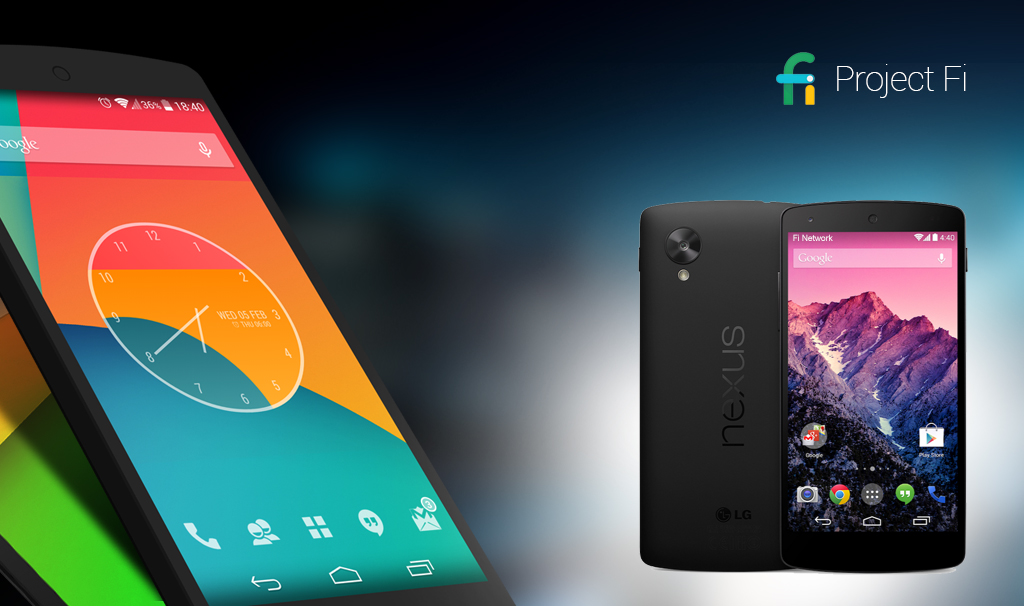 1. Does not comes with a business-friendly package. Project Fi has only one plan exclusively for the consumers and not one for a business.

2. Gives access only to T-Mobile and Sprint. Project Fi does not give users to multiple networks, only Spring, and T-Mobile which are known to have less than optimal coverage if compared to Verizon and AT&T.

3. Project Fi works on a Google-Only device. Nexus 6P, Nexus 5X and Nexus 6 smartphone are the only devices compatible with Google Fi. This is extremely unsuitable for the business as they do not have resources to buy their employees new smartphones.

Project Fi is undoubtedly an innovative idea. It has the power to revolutionize the whole mobile carrier industry, but the limitations (those they are few in numbers) are certainly there. However, Fi will be a great success for Google and also for the telecom service if it could go beyond the borders and reach to everyone around the globe.

Share your ideas and thoughts about this new Google venture and drop us an insight on what would be happening next?