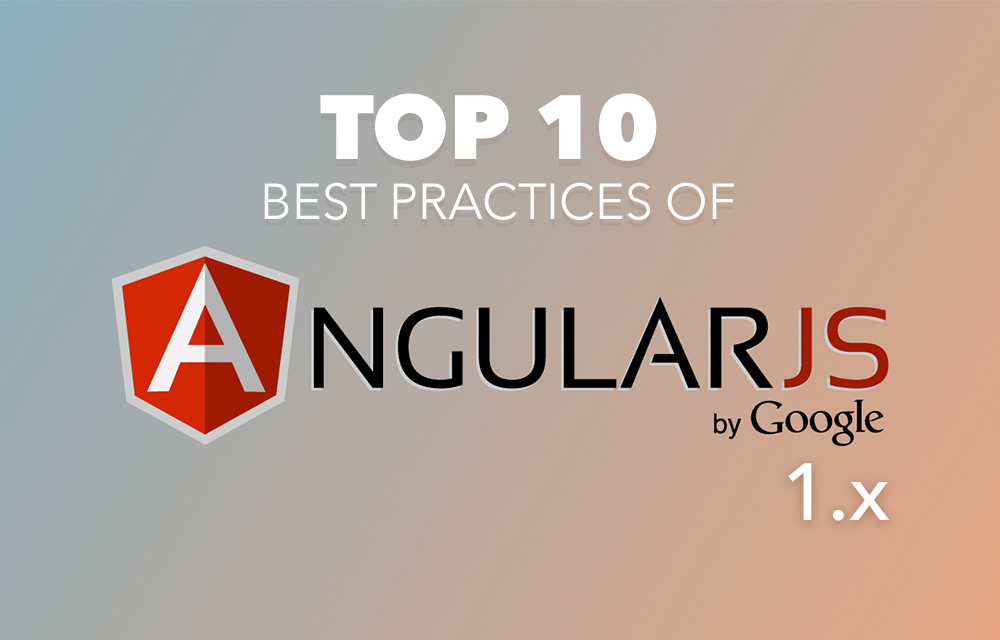 Angular JS is the need of the hour. This superheroic Javascript framework is just something one cannot think without when it comes to developing single page applications. Maintained by Google, this is a platform which needs not much introduction. Just by knowing the framework and taking up a few tutorial, you can become a pro in Angular JS.

But being a developer, I would suggest before you jump into the framework, you must try to adopt the Angular JS best practices. This will not only improve the quality of your code but will also reduce your burden to maintain it. I have been working on Angular JS for quite a long time and I feel following the rules written below will certainly help you to code in a better and cleaner way.

If you are a beginner, these 10 Angular JS best practices are going to open a box of solutions in minutes.

Now the question arises why we should noy try using double curly braces ({{}})? The answer is simple, double curly braces is much slower compared to the ng-bind, which is a directive and will place a watcher on the passed variable. Henceforth, it will only be applied when the passed value is actually changed whereas brackets, on the other hand are dirty-checked and are refreshed in every “Digest Cycle”, even if it is not necessary.

2. $scope vs Controller As Syntax

Now if you’re reading this blog I hope you already know what $scope does as I suppose you have already started developing codes in Angular JS. The reason behind using a controller as a syntax is that it is always better to hide $scope and exposing the members from the controller to the view via an intermediary object. By setting “this”, you can expose just as much you want to expose from the controller to the view. You can do that with a $scope too.

This will feels cleaner and will make it easy to see what is being exposed to the view. Note: “vm” here, stands for ViewModel and is just a convention to use it.

3. $inject Is Always Used Within An Array

Dependencies can be injected in two ways-

But the “More flexible approach” is-

Note: If you use Gulp or Browserify, time difference becomes negligible because in this case, we get a single js file.

4. Design A Proper Folder Structure Which Can Help You Code In A Modular Approach

We spend a lot of time writing codes. In the early phases of a project, the directory structure doesn’t matter too much and many people tend to ignore this angular js best practices. In short term this allows the developer to code rapidly, but in long-term, it creates a mess.

Below is a standard folder structure you can follow for your Angular JS application: 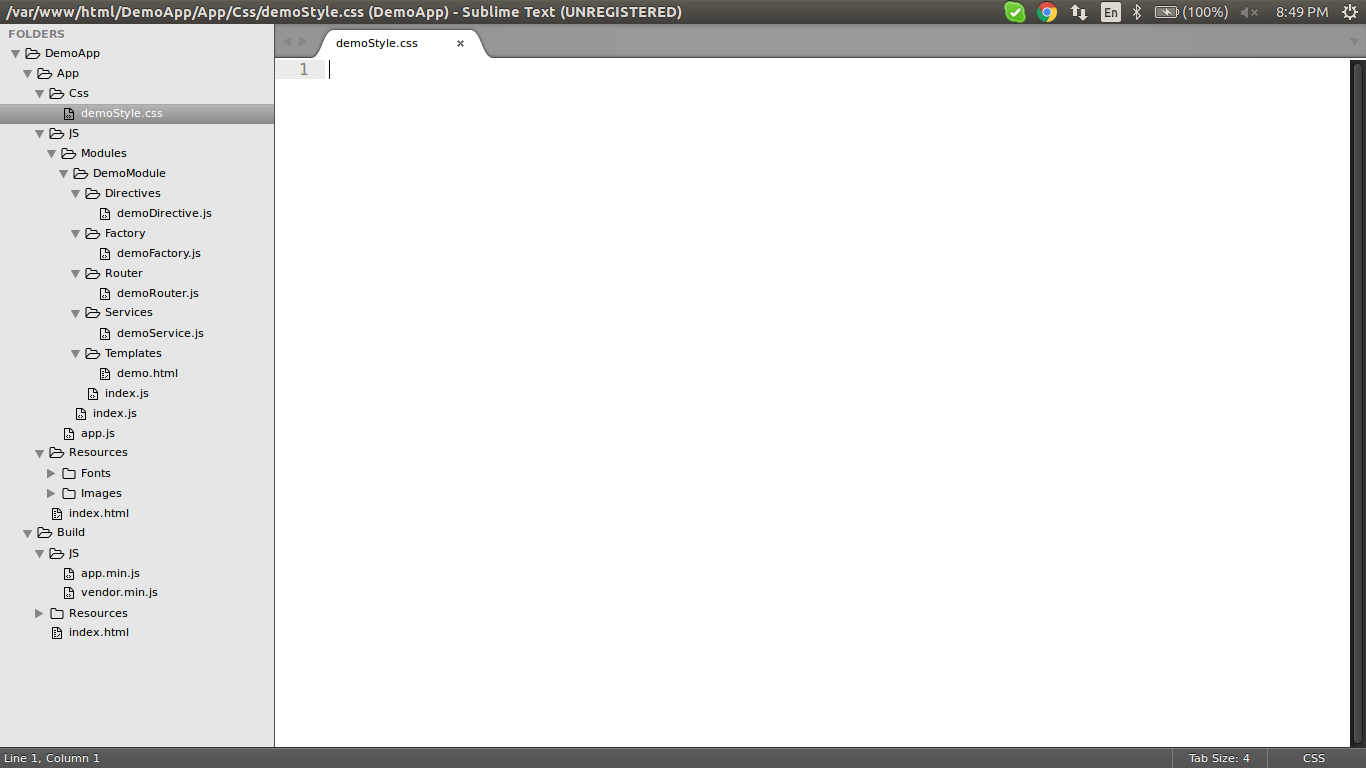 Note: All the contents of the Build folder are created automatically through gulp and  browserify.

What things to look into when you are arranging a folder structure to develop Angular JS application?

Following the above approach  will logically help to compartmentalize your apps and will be easy to locate and edit the code.

Your code will be much easy to scale. Adding new directives and pages will not add bloat to existing folders. Onboarding new developers should be much easier once the structure is explained. Additionally, with this approach, you will be able to drop features in and out of your app with relative ease. Hence, testing new functionality or removing it should be a breeze.

Debugging your code will become easy with this modularized approach in angular JS development. It will be simple to find offending pieces of code and fix them.

Writing test scripts and testing modernized apps is pretty easy to handle compared to non-modularized ones.

Why should we maintain common services for API call? This question is obvious to come in your mind and the main reason is-

Code Optimization & Error tracking : We maintain all API calls through a single http-service. So, our code is more optimized rather than writing http-service for each and every  API calls. Not only the code is optimized, but also we can easily track the error by using common http-service.

6. Maintain Constant To Store All The App Constants

7. Use Directive For DOM Handling

Directive is one of the important and useful concept of Angular Js. For DOM manipulation, directive is always first and best choice. This question always appears that when should we use Directives and the answer is, where a particular functionality or a reusable view component is needed. You’ll just declare your directive for that particular view and you can access this directive in any part of your app.

Suppose, we need a modal for different pages of our project but the functionality is same everywhere. So rather than declaring it everywhere, it is better to make the directive for that modal and invoke that directive,wherever you want.

8. Use Controller To Manipulate View-data

Controller is one of the powerful concepts of Angular Js. Controller basically manipulates the data part of any view. We can set the data of any view in many different ways, but it is always best practice to set the data into the view through it’s controller.

In the simplest terms, a directive in AngularJS is a reusable component. But before using it, Always keep in mind that we must create a directive when a piece of code is used more than once. Don’t make directive for those which are already provided by Angular JS and it is unnecessary to make a directive which is used only once.
*First, we define the Angular JS app and controller. Note that the list of movies is defined in the controller. 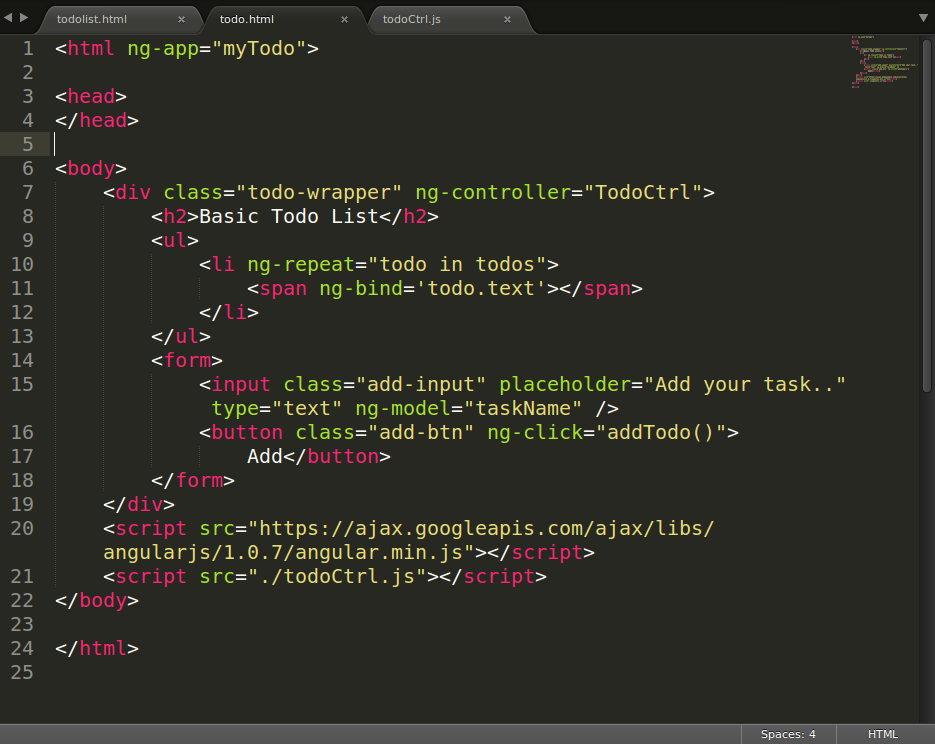 The To-Do HTML code with directive 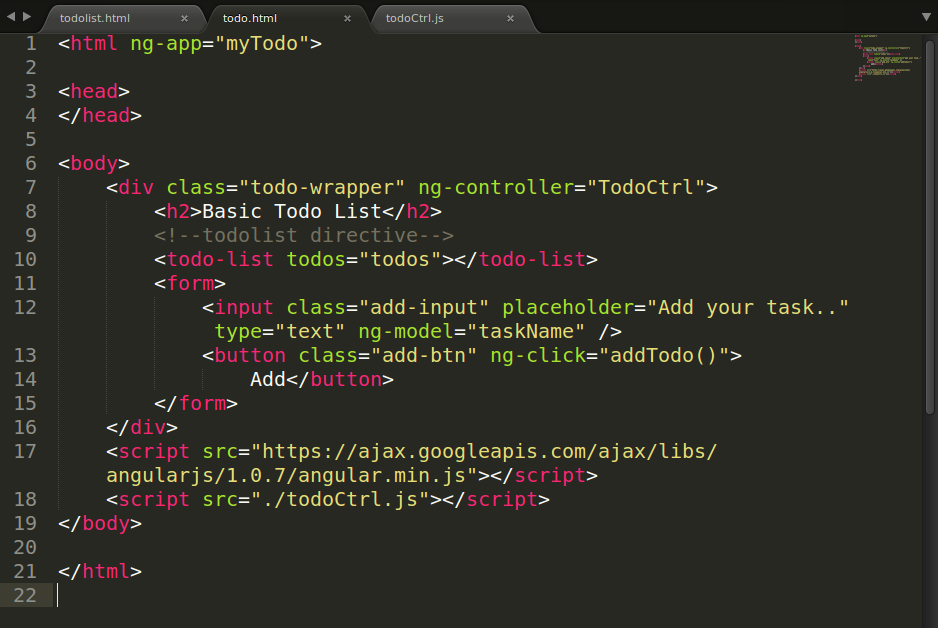 The To-Do controller with directive 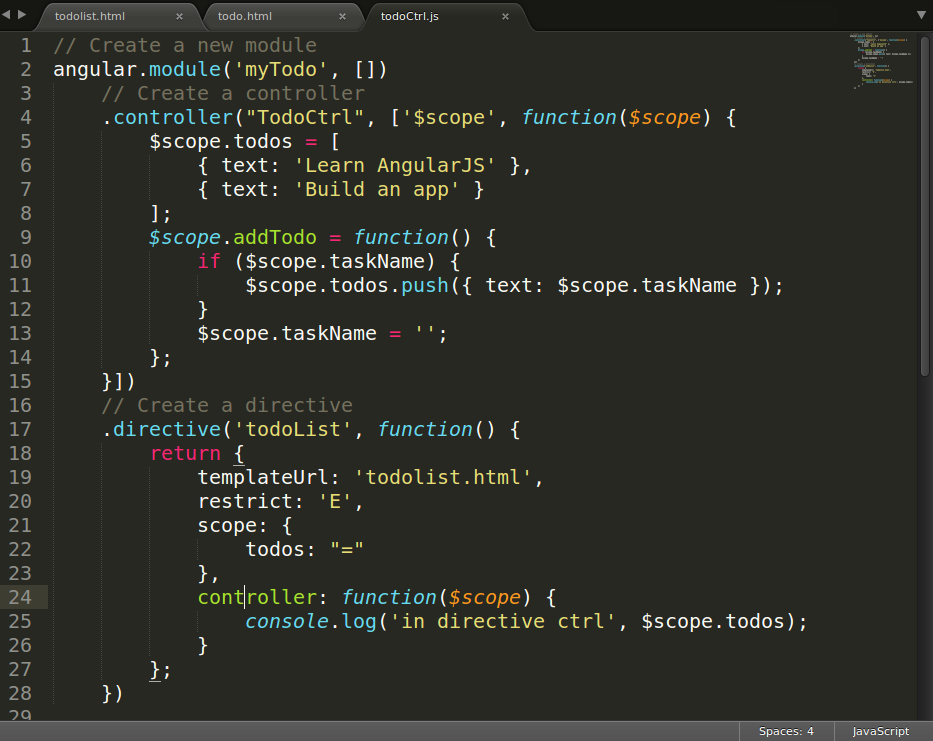 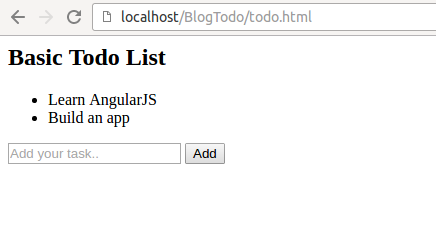 If you do decide to opt-in and build your AngularJS apps in a modularized fashion, be sure to concatenate and minify your code before using it in production. There are many great module bundler tools like Gulp, Webpack or Grunt that will help with this – so don’t be afraid to split code as much as you need.

You may not want to necessarily have just one giant.js file for your entire app, but concatenating your app into a few logical files like:

This will be greatly beneficial for reducing initial load times of your app. Before minify the code,some points you have to remember that – 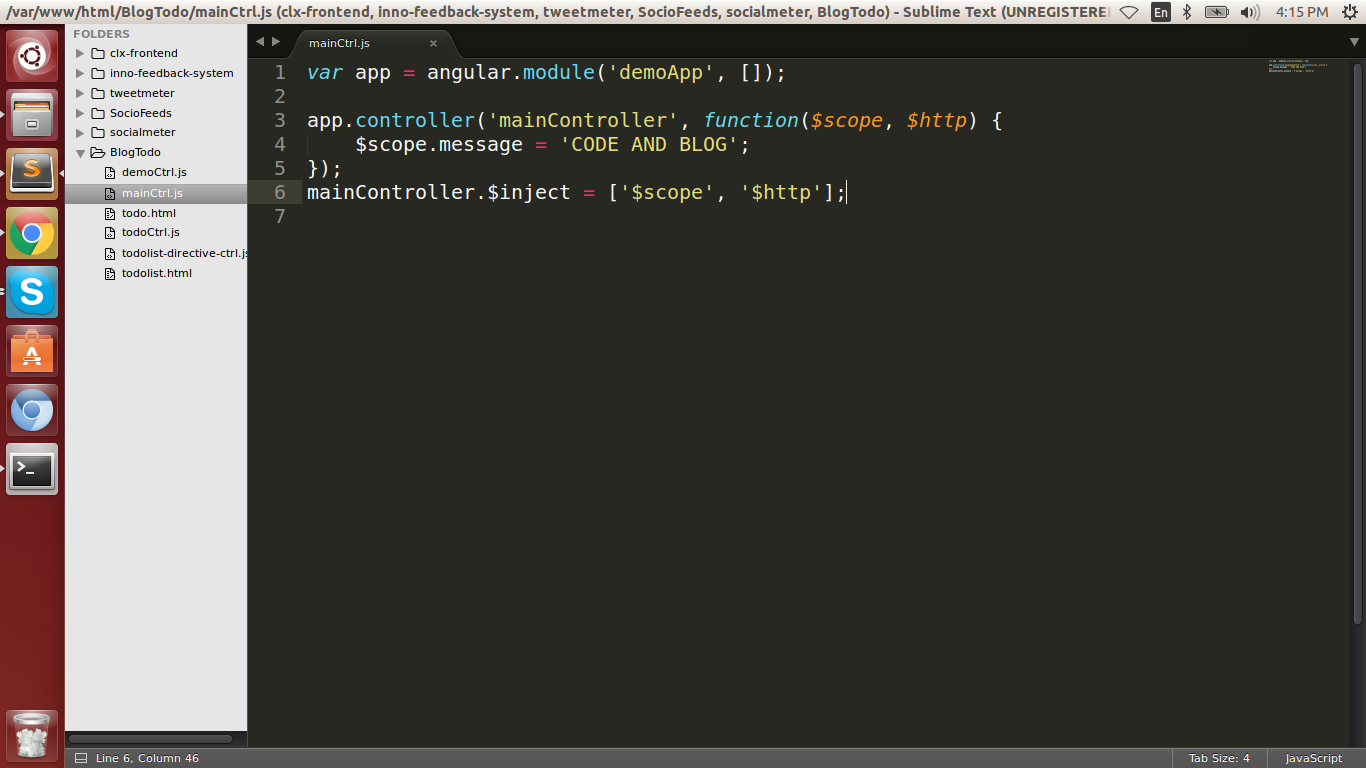 This is another solution for solving the annotation issue. Once you get in the habit of declaring all your Angular JS modules like this, then you won’t ever have to worry about minifying problems.

We’ve added $http into this example just to show how you would inject multiple things.

There is also a great package ( ng-annotate) that will help with the minification process. This is great since it can handle minification for you no matter which way you write your Angular files. You can use it by installing the package:

Then use it by calling:

There are also grunt and gulp plugins that can help automate this process.

So What’s Your Take?