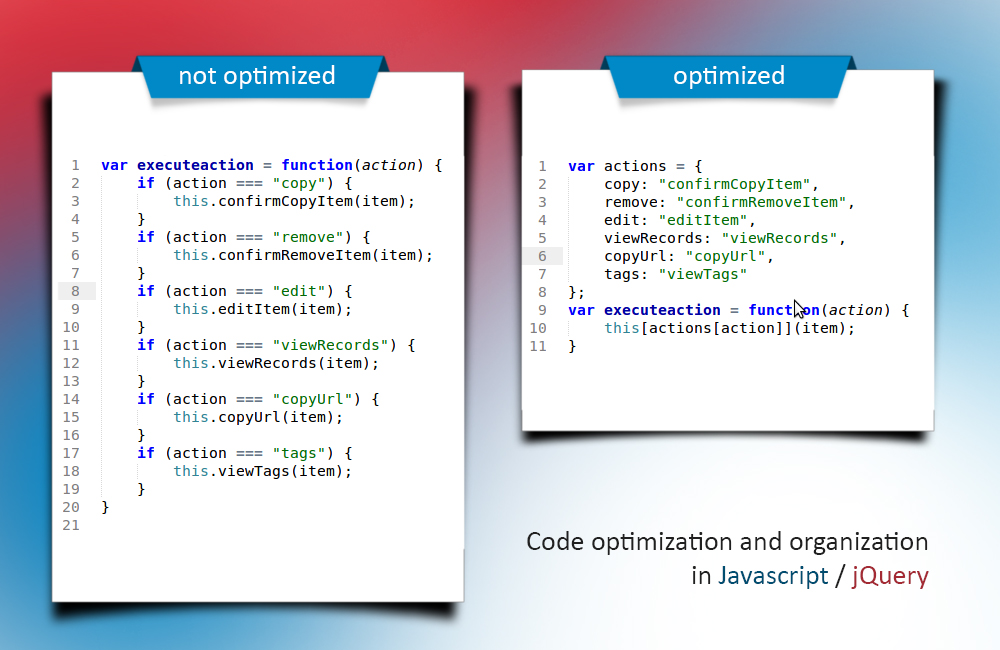 We have been working on a project for past 8 months (ongoing). Over the course of this project, we have learnt that small tweaks to general coding practices goes a long way in improving the overall performance of the code.

In this article, we will discuss some of these common JavaScript practices and tricks to code optimization that improve the overall efficiency and performance of our code. Most of the techniques described below are fairly intuitive once we grasp the underlying problem or overhead.

JQuery Chaining is a very powerful feature of jQuery that connects multiple functions and events on a particular selector. The following example shows how chaining makes our code shorter and faster.
Code 1

Using jQuery, we can attach events to an element in the following two ways:

The second method is better as it allows us to bind events to dynamic HTML elements.

Every time we define a new function and create a new closure, javascript adds a level to its scope chain. When the browser resolves properties, each level of the scope chain must be checked. In other words, JavaScript looks at the first item in the scope chain, and if it doesn’t find the variable, it bubbles up the chain until it hits the global object.

That’s why global scopes are slow. They are worst-case scenarios for object lookups.

4. Power of Native functions and constructs

Its good to be aware of native constructs provided by ECMAScript as it saves us from having to write our own algorithms. Some commonly used constructs are-

In case of using asynchronous code blocks, a common practice is to use global or closure variables to refer to object properties outside the scope of the asynchronous block. For example:

As discussed in point number 3 above, this takes longer time as the closure variables (in this example, me) are held at a higher level of the scope chain. We can improve this by binding the correct scope to our asynchronous function when we call them. For example,

We can define a method of a class in the following two ways:

When we define a class method using prototype (Method 2), only one copy of the function is created which is shared by all object instances of the class. The context within the function will refer to the instance which calls it. Hence, it is a more efficient way of defining methods than using ‘this’.

Reading an object property takes longer than reading a variable. It would do us good to remember this when we are referring to some object property frequently. We could improve our code’s performance by storing this property in a temporary variable.

In case we need to make several style updates for a particular DOM element, it is better to apply those changes at once instead of applying them one by one. This prevents the UI from being rendered repeatedly. In the following example, Method 2 is better than Method 1.

When working with similar cases as described in the above example, there is another way that’s far more efficient than using jQuery’s CSS method. We could add a new class to the DOM element and write the style changes against that class in our CSS file.

Every time we add a DOM element to the UI, it refreshes the entire screen. We can improve that by building DOM ‘off-line’ and adding it to the UI at once.

After we have completed developing our .js files, we can pass them through a javascript minimizer tool (such as JsMin) which removes the unnecessary code blocks (read comments and white spaces). This way, we just have to add one minified script file to our HTML. Its better because a request to fetch one comparatively larger file executes faster than the request to fetch multiple smaller files.

The idea is to load modules to the browser as and when they are required. When a user requests for a page, the first thing they notice is the HTML content. The functionality is required only after they get familiarised with the layout. We can achieve this by working with dependency managers like RequireJS or Browserify.

When we concatenate some substrings to create a larger string, all intermediate results are stored in temporary variables. Therefore the second method is optimized as it requires lesser memory for execution.

Lengthy if-else blocks can be reduced to a single line of code. All we need to do is create a Javascript object to map each condition to a function name. It works in a manner similar to HashMap data structures. The following example illustrates this technique.

defineProperty gives us more control over the behaviour of object properties that we define. We get options to- prevent further modification or deletion after an object property has been defined, control whether the property shows up during enumeration or not and so forth.

Let’s consider the example of data structure Stack. We define the push method for Stack as follows:

Since we are dealing with Stack, ‘push’ will be an integral method for any implementation. We would be referring it repeatedly and wouldn’t want anything to modify, overwrite or delete our definition. This can be controlled by defining it as follows:

Another advantage of working with defineProperty is that we can use the getter/setter methods to get or set the value for an object property.

Here the get method is called implicitly when we refer to square.area. Read here for more information on defineProperty.

These are some of the many best practices that we have found effective. We hope you find these helpful. Do comment and share optimization techniques from your experience. Happy coding.